Hello there and welcome! I've removed some goofiness from the 'About' page, but there might still be some left over... or new. For goofiness is like leg hairs. You can shave them off, you can even wax them out, but the roots will still be right THERE, just waiting to sprout back to life. And without firing up a blazing laser they ain't going nowhere. No ma'am.

Today I decided to check out a new show, Dark Matter. 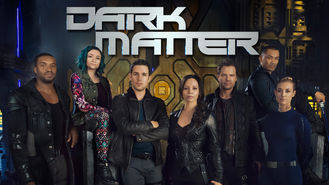 It has fairly good ratings/reviews. Got through half an episode and turned it off, bored. But that's not the reason for this post. The reason is a mini-rant.

Seeing how I aspire to be a writer, this might not be the smartest post to post as I might well be guilty of all the things I accuse this show of. I would hope I'm not, but it's always the hardest to see faults in your own work. So, if that's the case...

Truthfully though, some of character clichés are simply difficult to avoid and sometimes they just truly, truly WORK.  I also happens that they're completely unnecessary, but they're pulled out just so delightfully well that they become a guilty viewing/reading pleasure and I wouldn't trade them for the world. Looking at you, steaming hot pirates, adorable nerds, evil-but-good vampires, sexy vixens...

In this case though... nope. Not for me.

Perhaps the plot is good, maybe the characters get developed well, I don't know. I can't judge that and I won't say a bad word about the story itself, because I didn't get to it. Could be totally great. But those who say that the opening pages/minutes can sometimes be the most important part of the story are right. The beginning can be the give-it-a-try/give-it-a-rest for the audience. I give Dark Matter a rest.

So, the premise: six people wake up on a spaceship with no memory of who they are or why they're there. Okay, here goes:

#1 One dude wakes up. He finds the ship's bridge. Wants to look around. Suddenly a woman bursts in and starts kicking his ass randomly. She succeeds in kicking his ass. He stays down. She fixes the ship. Dude gets up asking "what was that for?" she says "you were in the way."

Like, what? Seriously? I am SO SICK AND TIRED of shoehorning strong badass women everywhere. But usually the creators at least have a decency to make it logical. Not "Oh, we need a scene of a hot woman kicking a dude's ass. I know! They are both confused and have no memory so instead of asking what's up, let's have her fight him so she can throw in a badass one-liner and then we'll consider moving on with logic!"

Frankly, the next person that comes into the room asks them who they are.

Funnily enough, the chick is later portrayed as the reasonable and cool-headed one unlike some other dude who could indeed logically burst into the room and attack the first fella. But he's not a hot chick so.

#2 Characters... men, there's plenty of ways you can build characters, mix and match stuff, surprise the viewer, or just make them feel real and not cut out of cardboard. Maybe these get better later, but I honestly don't have the patience nor the time to invest in this show with what it showed me at start.

a) there's the aforementioned hot-badass chick

b) there's the soft mellow fellow who is also the first one to have woken up and obviously smells of being the protagonist (I don't mind, I prefer weaker protagonists, it makes their struggles more interesting to me)

c) there's the tough-brainless guy who just wants to shoot guns, picks up the biggest one and hopes he'll get to shoot some enemies ASAP

e) there's an Asian fellow who found a room with katanas and other melee weapons (in the age of spaceships and laser guns) and started swinging them around making a fighting show for like a minute of screen time. Probably so that the mellow guy can answer his question of "can you use these" saying "i take that as a yes" after the Asian fellow ends his sword dance with swords by the mellow guy's throat. Because that's what you do when you both don't have your memories and know nothing about one another.

#3 Oh, and then there's an android woman who is in theory an andoid and most of the time replies to things like a machine should, but then suddenly has a snarky reply out of the blue. Not to mention inconsistencies.

There's an enemy ship approaching and the android goes "Yes, but I don't think they mean to offer assistance", then the crew lady says "why not?" and android answers "because they just fired missiles". Like, I'd imagine a robot would say "the enemy ship fired missiles our way" not engage in a back-and-forth banter.

Mind you I'm saying it because she's previously shown to only answer straighforwardly to questions and use full and organized sentences even if the question is repeated and she's repeating her answer.

Or maybe I'm just too old and fussy.

Orilija sat under the wall, hugging a dirty pillow and watching Kyrema clean his gun and lock the silencer on.
“It’s simple,” he said, in that deep voice; so soothing, almost mesmerizing. “Fate doesn’t like to be fought, the future doesn’t like to be changed. One year, that’s all we’ve got before the Sinhail claims his first victim. Once lady Asantra arrives on the continent, I will have to make sure I can focus on keeping her safe. The more we do now, the better.”
Orilija nodded, then turned away to look out through the greenhouse’s window. In several minutes the owner would walk in and face the gun.
A merciful death, for the woman’s future was so much worse than a simple bullet to the head.
“If I want to challenge fate,” Kyrema said, sat on a box, and leaned on his spread legs, gun facing the ground, “I cannot gamble. I cannot allow myself to wait and see. Twenty-six souls, Orilija, are what my gift allows us to save. Do your part. I know it’s hard, but when you need a room for error, you cannot leave one for hope.”